Some people doesn’t even know what chicken base is and some tend to get confused over a chicken base, chicken stock, and chicken broth so in this article we will be going over their differences and at the same time their similarities. WHAT IS CHICKEN BASE? Well, basically chicken base is defined as a highly concentrated stock that actually has a deeper and richer taste compared to broth and stock.

WHAT IS CHICKEN STOCK? Chicken stock is usually made by simmering various ingredients (including chicken) in water. It is most commonly used in soups and sauces.

How to Make Chicken Stock Via International Culinary Center

CAN I BUY THIS FROM THE GROCERIES?

Yes, but making it at home would always be better.

WHAT IS A CHICKEN BOUILLON? This normally comes in cubes and is commonly used for soups and stews by dissolving it in a boiling liquid. It also comes with beef and pork.

WHAT IS A CHICKEN BROTH? Most people say that chicken broth and chicken stock is basically the same thing but they are actually not. We’ll talk about their differences later but for now, let us define what chicken broth is.

So basically, chicken broth is a very savory liquid. It is when you boil water with the meat of the chicken or you could also add vegetables with it.

Here is a video discussing and demonstrating the differences of Chicken Broth and Chicken Stock:

Stock vs Broth Makes All The Difference Via ChefToddMohr

SUBSTITUTION WITH CHICKEN BASE

Chicken stocks, chicken bouillon, and chicken broth can all substitute chicken base but they’re all entirely different

Chicken Base VS Chicken Stock

Chicken Base VS Chicken Bouillon Chicken Base VS Chicken Broth

Where Can I Get Chicken Base? 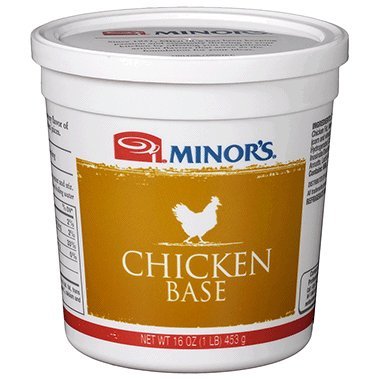 You can simply go to amazon and look for Minor’s Chicken Original Formula which is basically everyone’s all-time favorite chicken base. Because it is ALL NATURAL with No artificial flavoring and ingredients, it has no chemical preservatives which are very safe and healthy for everyone.

How to Make Chicken Base AT HOME Making things that are food related at home will always be cheaper and healthier. You can assure that you know exactly what is in the food you will serve for your family. So if you want to make a chicken base that has No chemically added ingredients on it then here is how:

It is pretty simple and very healthy so it is definitely a must try especially if you simply love the organic stuff. You can even put them into ice trays or freezer bags and it will last for about 2-3 months.

Here is a sample video of how to make chicken bouillon powder which is basically chicken base:

It doesn’t really matter which of these you use because they are all chicken based but if you have more time then you can make your own if not try the other substitute or you can get it from the groceries.

Everything You Need to Know About What is Tarragon
Next Post: Potato Madness: Quick & Easy! How To Steam Potatoes?