Filleting fish is not that easy, especially if you are new to doing this task. Fortunately, you can now use an electric fillet knife to make the job easier and faster as well.

Also, it’s not just about speeding up the work – you also want to prepare your food properly for quality and presentation. Since fish meat products are delicate, an efficient tool is really needed.

With the right electric fillet knife, you can easily separate fish meat, skin and bones in just a matter of minutes (or even seconds, in small types of fish). All the work is, of course, made easier and faster since the filleting knife is electric-powered. Things to Look for in an Electric Fillet Knife

Important Points to Remember When Buying an Electrical Fillet Knife Who Will Benefit from an Electrical Fillet Knife?

A lot of people will benefit from using an electrical fillet knife, such as the following: How To Use Electric Knife

Do you belong to any of the group of people above? Then get a good ​chef knife as soon as possible as this will make your job of filleting fish easier.

If you are used to using an ordinary (manual) filleting knife, you might find that it’s quite difficult to use an electric model at first. However, when you get used to it, you will really appreciate it.

How to Choose the ​A Good Knife

In the next section, I will provide you with a Top 5 list of some of the ​butcher knives today. Compare their features and look their overall functionality and usability. And of course, the price is also an important factor in deciding which model of fillet knife to get.

As for the price, however, don’t just go for the cheapest model that you can find. There are times when it’s more practical to invest on an expensive unit if it will provide you with more uses (and if it will last for a long time). In such cases, the product will pay for itself eventually. Below, I have reviewed 5 of the best electric fillet knives on the market. I know, there are lots of choices out there (which can be confusing) – consider this a shortlist of your choices. These are the best of the best, so you really can’t go wrong from choosing any of them. 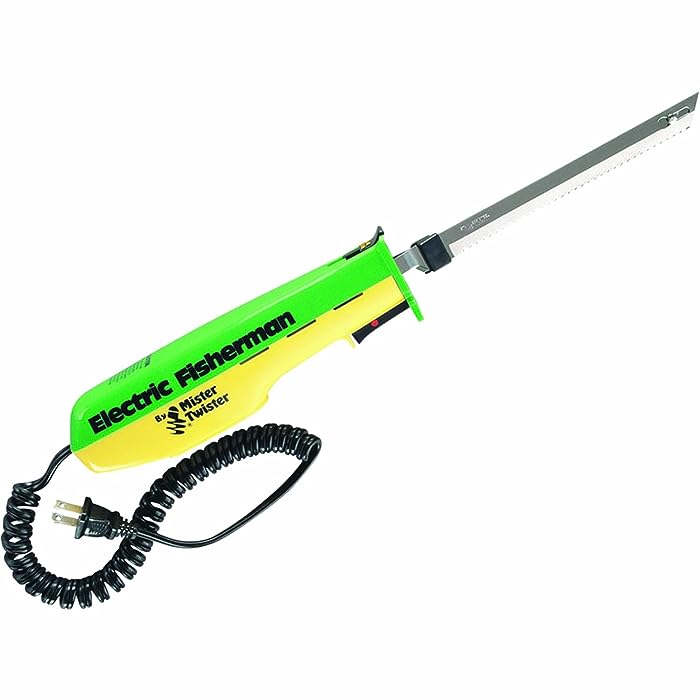 The Mister Twister fillet knife is a powerful unit equipped with heavy-duty bearings and gears for efficient cutting of fish meat like sushi.

This particular model comes with a safety lock for your (and your children’s) protection. It also comes with a blade-release feature so that you can quickly remove the blade when it needs to be cleaned or replaced.

With this tool, you can easily separate fish meats from their bones – and do so quickly as well. It has an 8-inch long blade length that can cover a wide area in 1 passing.

Please note that while this knife is dishwasher safe, hand washing it is still recommended. Really, you need to take good care of your knife (any knife, actually) to make it last long.

The Mister Twister electric fillet makes for a fine choice if you’re looking for a kitchen tool that will help you fillet fish meat. It’s really powerful and functional and can speed up your work many times over. And hey, it’s available in 2 attractive colors – green and yellow.

This model is a battery-operated unit – so, it’s cordless. The fillet knife can be charged as it comes with a charger.

A full charge will last for about 80 minutes – and during this time, it will stay in constant power to finish all the filleting work you have in line. Should you need to recharge it, however, it will take about 2 hours.

If you are specifically looking for a cordless/ rechargeable fish fillet knife, this model makes for a great choice. It’s actually reasonably priced and it will make the work of filleting fish so much easier and faster as well. And don’t forget – it works well for small and big types of fish.

Made of high quality materials and heavy-duty motor, this model of electric knife from Rapala will make your fish filleting work so much easier and faster.

This particular unit comes with a 7.5-inch long blade to handle all your filleting need. And with its 8’-cord, it’s easy to maneuver and move around as you use it.

To operate, you simply need to press the power button and move the knife along the meat to be sliced. The blade will cut through meat easily without too much effort required from you.

All in all, this is a good type of electric fish fillet knife. However, if you plan on filleting large types of fish, this model may not be up to the task. 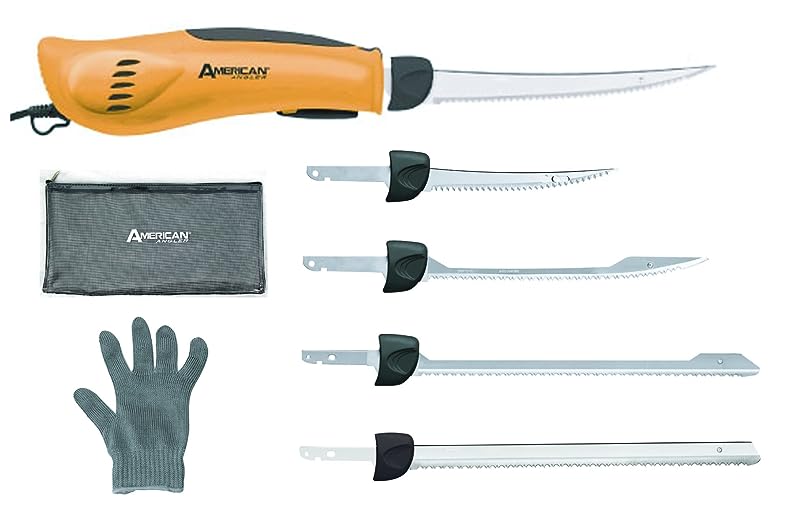 Here’s a kit that includes a set of electric fillet knife, blades, and a glove. If you want to make sure that you have the right blade for filleting different types of fish, consider this kit.

The blades included in this kit come in different forms, to accommodate filleting your fish. Since they’re equipped with airflow design, the blades won’t stick to the meat during the process of filleting.

This model also comes with an 8-foot cord, so it’s really convenient to use. This professional series from American Angler can also be used as a commercial electric fillet knife.

If you want a complete set of electric fillet knife, this can be one of your options. It also includes a large-sized glove to help you do the task of fileting fish easier – especially if you’re using it outdoors.

This model of fillet knife is similar to the one at the Top 4. It’s not a complete kit, however, as the package only includes 1 type of blade (an 8-inch curved blade).

The unit is equipped with a very powerful motor to handle all kinds of fish filleting jobs. Therefore, this model is not only for fishing enthusiasts but for commercial fishermen as well.

This fillet knife is an electrical model – so, you need a power source to use it. However, it also comes with an 8-foot cord for convenience.

If you want just one piece of blade on your American Angler PRO fillet knife, this would be a good option (and not the complete kit at the Top 4 slot). Since you will only be getting one type of blade, this model is also less expensive than the full kit package.

Which is the Best Electric Fillet Knife on the Market?

Now, if you want a cordless fillet knife, go for the Rapala Lithium Ion fillet knife. Without a cord, it’s easier to control and manage. A fully charged battery will also last for 80 minutes – and you can already fillet a lot fish with that time, right? And should the battery be all used up, it only takes about 2 hours to fully charge again.

So, just look at the Top 5 list again – you can then make an informed decision when choosing the best electric fillet knife for you.

If you are looking for the regular electric knives, visit here.